The turkey vulture [Cathartes aura], also known in some North American regions as the turkey buzzard [or just buzzard], and in some areas of the Caribbean as the John crow or carrion crow, is the most widespread of the New World vultures. One of three species in the genus Cathartes, in the family Cathartidae, the turkey vulture ranges from southern Canada to the southernmost tip of South America. It inhabits a variety of open and semi-open areas, including subtropical forests, shrublands, pastures, and deserts.

The turkey vulture is a scavenger and feeds almost exclusively on carrion. It finds its food using its keen eyes and sense of smell, flying low enough to detect the gases produced by the beginnings of the process of decay in dead animals. In flight, it uses thermals to move through the air, flapping its wings infrequently. It roosts in large community groups. Lacking a syrinx—the vocal organ of birds—its only vocalizations are grunts or low hisses. It nests in caves, hollow trees, or thickets. Each year it generally raises two chicks, which it feeds by regurgitation.

In the United States, the vulture receives legal protection under the Migratory Bird Treaty Act of 1918.

It has hard and stiff black plumage, blue facial skin and a casque on top of the head. It has a bright red or yellow colored neck and wattle. The feet are huge and strong with long, dagger-like claw on its inner toe. The sexes are similar. The male, at 30 to 37 kg [66 to 82 lb], is smaller than female, at an average of 58 kg [128 lb]. Compared to the Southern Cassowary, the Northern Cassowary has a slightly shorter bill, but a slightly longer tarsal length.

The Asian Red-eyed Bulbul [Pycnonotus brunneus] is a species of songbird in the Pycnonotidae family. It is found in Brunei, Indonesia, Malaysia, Burma, Singapore, and Thailand. Its natural habitat is subtropical or tropical moist lowland forests.

The Baya Weaver [Ploceus philippinus] is a weaverbird found across South and Southeast Asia. Flocks of these birds are found in grasslands, cultivated areas, scrub and secondary growth and they are best known for their elaborately woven nests. These nest colonies are usually found on thorny trees or palm fronds and the nests are often built near water or hanging over water where predators cannot reach easily.

These are sparrow-sized, 15 cm/6 inches and in their non-breeding plumage, both males and females resemble female house sparrows. They have a stout conical bill and a short square tail. 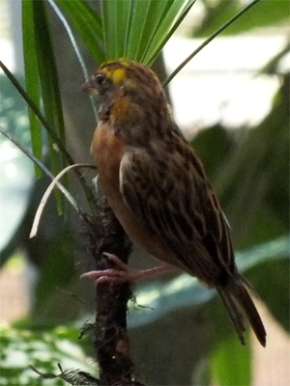 The White-throated Kingfisher [Halcyon smyrnensis] also known as the White-breasted Kingfisher or Smyrna Kingfisher, is a tree kingfisher, widely distributed in Eurasia from Bulgaria, Turkey, east through Southeast Asia. It can often be found well away from water where it feeds on a wide range of prey that includes small reptiles, amphibians, crabs, small rodents and even birds. During the breeding season they call loudly in the mornings from prominent perches including the tops of buildings in urban areas or on wires.

This is a large kingfisher, 28 cm in length. The adult has a bright blue back, wings and tail. Its head, shoulders, flanks and lower belly are chestnut, and the throat and breast are white. The large bill and legs are bright red.

The tree in these photos is Pipturus argenteus: Australian Mulberry.

The Crimson Sunbird, Aethopyga siparaja, is a species of bird in the sunbird family which feed largely on nectar, although they will also take insects, especially when feeding young. Flight is fast and direct on their short wings.

Crimson Sunbird is a resident breeder in tropical southern Asia from India to Indonesia and the Philippines. Two eggs or three eggs are laid in a suspended nest on a tree. This species is found in forest and cultivation. 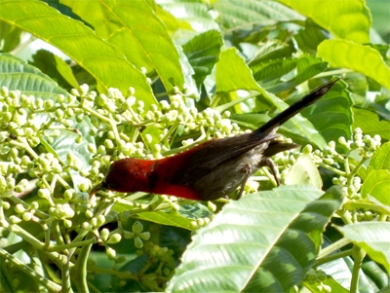 Crimson Sunbirds are tiny, only 11cm long. They have medium-length thin down-curved bills and brush-tipped tubular tongues, both adaptations to their nectar feeding. 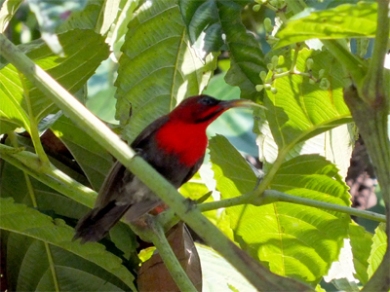 The adult male has a crimson breast and maroon back. The rump is yellow and the belly is olive. The female has an olive-green back, yellowish breast and white tips to the outer tail feathers.

The plant on these photo is Leea indica [Bandicoot Berry], a shrub with greenish-white flowers. This plant is found in India to Indo-China, the Malay Peninsula and Indonesia.