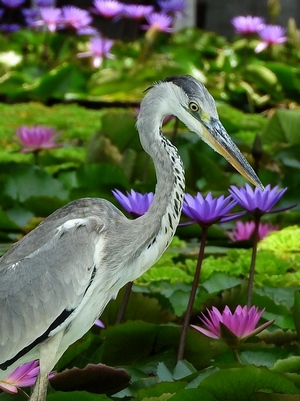 The grey heron [Ardea cinerea] is a long-legged predatory wading bird of the heron family, Ardeidae, native throughout temperate Europe and Asia and also parts of Africa. It is resident in much of its range, but some populations from the more northern parts migrate southwards in autumn. A bird of wetland areas, it can be seen around lakes, rivers, ponds, marshes and on the sea coast. It feeds mostly on aquatic creatures which it catches after standing stationary beside or in the water or stalking its prey through the shallows.

Standing up to a metre tall, adults weigh from 1 to 2 kg [2.2 to 4.4 lb]. They have a white head and neck with a broad black stripe that extends from the eye to the black crest. The body and wings are grey above and the underparts are greyish-white, with some black on the flanks. The long, sharply pointed beak is pinkish-yellow and the legs are brown.

The birds breed colonially in spring in “heronries”, usually building their nests high in trees. A clutch of usually three to five bluish-green eggs is laid. Both birds incubate the eggs for a period of about 25 days, and then both feed the chicks, which fledge when seven or eight weeks old. Many juveniles do not survive their first winter, but if they do, they can expect to live for about five years.

In Ancient Egypt, the deity Bennu was depicted as a heron in New Kingdom artwork. In Ancient Rome, the heron was a bird of divination.

The Chilean flamingo [Phoenicopterus chilensis] is a large species of flamingo at 110–130 cm [43–51 in] closely related to American flamingo and greater flamingo, with which it was sometimes considered conspecific.

It breeds in South America from Ecuador and Peru to Chile and Argentina and east to Brazil. Like all flamingoes it lays a single chalky white egg on a mud mound. 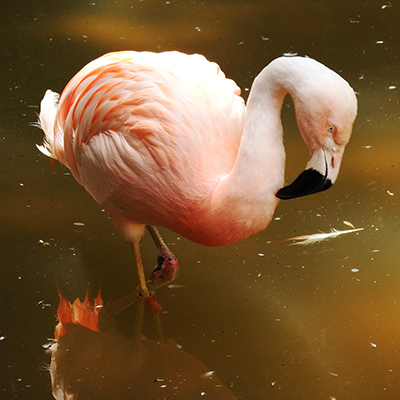 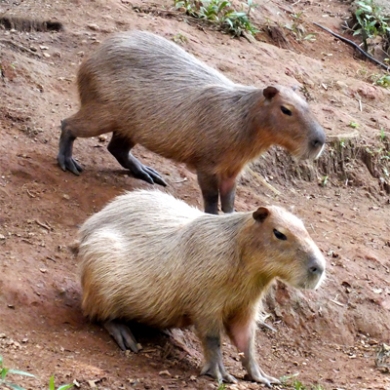 The capybara [Hydrochoerus hydrochaeris] is the largest rodent in the world, followed by the beaver, porcupine, and mara. Its closest relatives are agouti, chinchillas, coypu, and guinea pigs. Native to South America, the capybara inhabits savannas and dense forests and lives near bodies of water. It is a highly social species and can be found in groups as large as 100 individuals, but usually lives in groups of 10–20 individuals. The capybara is not a threatened species, though it is hunted for its meat and hide and also for a grease from its thick fatty skin which is used in the pharmaceutical trade.

It has hard and stiff black plumage, blue facial skin and a casque on top of the head. It has a bright red or yellow colored neck and wattle. The feet are huge and strong with long, dagger-like claw on its inner toe. The sexes are similar. The male, at 30 to 37 kg [66 to 82 lb], is smaller than female, at an average of 58 kg [128 lb]. Compared to the Southern Cassowary, the Northern Cassowary has a slightly shorter bill, but a slightly longer tarsal length.

The hippopotamus [Hippopotamus amphibious], or hippo, from the ancient Greek for “river horse”, is a large, mostly herbivorous mammal in sub-Saharan Africa, and one of only two extant species in the family Hippopotamidae [the other is the pygmy hippopotamus]. After the elephant and rhinoceros, the hippopotamus is the third largest type of land mammal and the heaviest extant artiodactyl. 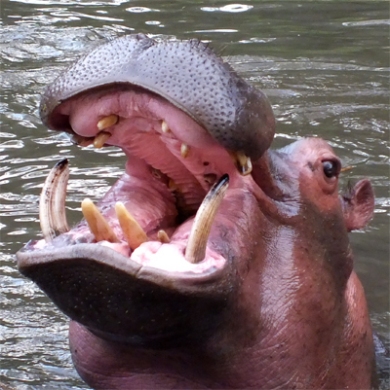 The hippopotamus is semi-aquatic, inhabiting rivers, lakes and mangrove swamps, where territorial bulls preside over a stretch of river and groups of 5 to 30 females and young. During the day, they remain cool by staying in the water or mud; reproduction and childbirth both occur in water.

The King Protea [Protea cynaroides] is a flowering plant. It is a distinctive Protea, having the largest flower head in the genus. The species is also known as Giant Protea, Honeypot or King Sugar Bush. It is widely distributed in the southwestern and southern parts of South Africa of the fynbos region.

The King Protea is the National Flower of South Africa.  The King Protea has several color forms and horticulturists have recognized 81 garden varieties, some of which have injudiciously been planted in its natural range. In some varieties the pink of the flower and red borders of leaves are replaced by a creamy yellow. This unusual flower has a long vase life in flower arrangements, and makes for an excellent dried flower.